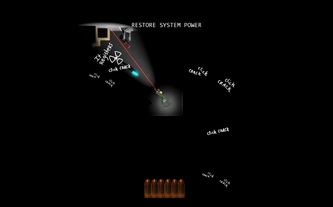 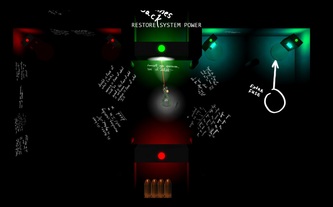 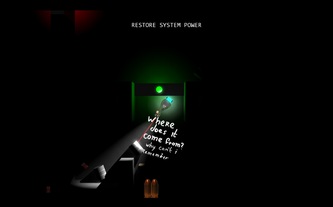 The Lift is a top-down horror survival shooter inspired by the human fear of the unknown. The game’s goal is to restore power to a broken lift which has stranded you in a strange and desolate place. You must find the replacement power cores scattered throughout the environment and reactivate the power stations. Beware, something else is down there watching you and you can’t hide forever. Make every shot count. Your gun only carries 7 rounds and additional ammunition is scarce. This game is intended for those who enjoy horror, suspense, and close calls.

The Lift is one of my favorite projects to date. I wanted to make a game where the player fears the unknown. It has a simple premise: the player is hunted by an unrelenting malevolent entity.

What Went Right
Sound Design: The Lift uses sound to paint a picture of the unseen environment surrounding the player.  Almost every sound the player hears is produced by the monster moving in the dark.  This audio alerts the player that the monster is active even though it is unseen.  The monster emits a distinct low roar when it hears the player, who quickly associates the sound with an impending attack. The player knows that the creature is closing in, but he does not know where it will come from. This creates a strong feeling of anxious anticipation that is initiated and driven strictly by audio.

Testing and Iteration: During The Lift's production I tested and iterated daily.  This allowed me to quickly determine which gameplay elements were worth keeping.  I often tested multiple iterations per day.  Every element of the system was stress tested to ensure only the best made the cut.  I used surveys to gather statistical data on each user's experience.  This data allowed me to isolate player trends.  I wanted to ensure that users had the experience I intended.  Whenever I made an adjustment to the game, I did so with a specific outcome in mind.  I then evaluated the testing data to determine whether the adjustment achieved the intended result. If the outcome deviated from my expectations, I looked at how it affected the experience overall.  When players responded favorably to a change, I kept it. Otherwise, I discarded it. Several of the game's features (including the doors and laser sight) were implemented in response to playtesting feedback.

Minimum Deliverable Product: During development, I focused on the core features that made the game engaging.  The game's core action loop had to be fun before I implemented additional features. I had prototyped and tested the core of The Lift's gameplay by the second day of production.  Even in this early state, testing indicated that players were unnerved by the experience.  By sticking to fundamentals, I delivered on the core experience before expanding.  This resulted in a solid foundation upon which I could build a scalable product.

What Could Have Gone Better
Story: Many players enjoy The Lift's story, others miss it entirely.  Understanding The Lift's story requires paying special attention to the environment.  The plot is divulged through fragments of luminescent text scattered across the level.  Making sense of these fragments is left entirely to the player. In retrospect, this was far from ideal. When one is fleeing from a relentless enemy, stopping to read isn't a top priority.  Many players are so focused on avoiding the monster they are unable to follow the story.  At the end of the game, players who followed the story often laughed at the futility of their own actions and left the experience with a smile.  However, many others missed the story entirely and were confused by the ending. Despite this confusion, they usually enjoyed the overall experience.

What Went Wrong
Monster Art: It is a considerable challenge to create both a decent monster and a solid experience in 9 weeks.  The last thing I wanted to create was a laughable monster.  The early prototype showed that a I could make a frightening experience without a scary creature design.  Despite several concepts, I settled on an abstract monster.  The toughest part of top-down monster design is creating a silhouette that players find scary.  Many horror techniques used in the first-person perspective don't translate into the top-down perspective (e.g. it is very difficult to communicate that the monster is looking directly at the player).  Time after time, I returned to my prototype art: a white sphere with a black arrow on it.  In the end, I shipped the game with this abstract monster because I did not have the time and resources to produce something better.