"It's rare to see a gem like this for DODs. Brushwork is clean and texturing is spot on as well. I hope some servers pick this up, it is highly polished and very well done!" --pyrozen

"If I didn't know better, I actually would think this is a stock map." -- Ti Fiego 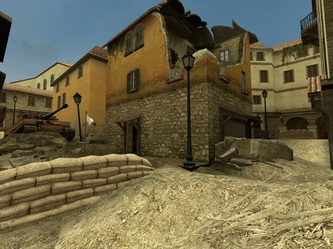 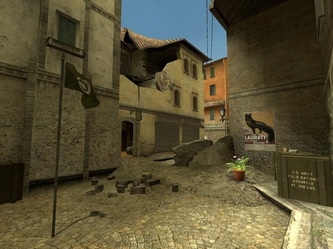 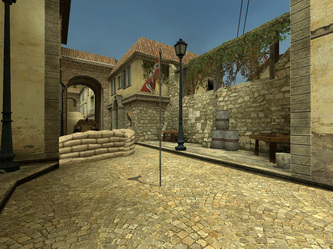 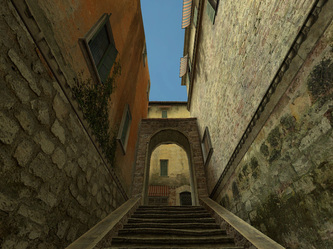 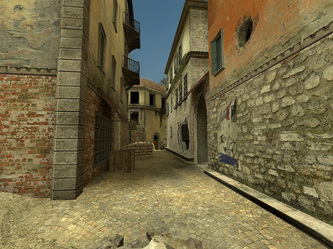 DoD_Husky is based on Operation Husky: the Allied invasion of Sicily, in 1943, during the Second World War.  The map, which was created for the game Day of Defeat: Source, features fast-paced urban combat.

Day of Defeat is a highly competitive experience.  Players expect personal skill and team coordination to determine the outcome of any match.  To deliver on this expectation, the level had to be carefully balanced.

Superficially, DoD_Husky is an an asymmetric level where one team must fight uphill.  In reality, the map is designed to capture the essence of an uphill battle without favoring one team over the other.  I used multistory buildings to mitigate the disadvantage of fighting uphill.  Because the buildings are situated on a hill, players can enter a building at street level on one floor and exit it at street level on another.  This enables players to advance uphill without exposing themselves to enemy fire.  At key tactical locations, the surrounding buildings provide elevated positions both teams can use to their advantage.

Early in development I started using sight lines to affect when and where players could engage in combat.  In DoD_Husky all long-distance sight lines look out across sections of level ground.  These long sight lines (where players are most likely to see each other) cause players to engage on equal terms. All the downhill sight lines are limited (e.g. they are blocked by buildings, look out onto street corners, or force the player to expose themselves).  This ensures that one team is not forced to advance into continuous fire from an enemy that holds the advantageous high ground.

While designing the level's various firing positions, I ensured that each position had at least one counter-position.  Each position allows players to cover specific routes through the level.  Aside from each team's starting area, the firing positions are arranged to encourage maneuvering and prevent bottlenecks (e.g. a skilled sniper or machine gunner can not single-handedly halt the enemy advance, as his enemies will simply take a different route and circumvent his position).  Since each firing position can be approached and attacked from multiple directions, players rely on their teammates to protect their flanks.  During a match, each team struggles to advance along multiple routes while preventing their enemy from doing the same.  When a route is compromised, the team's positions become vulnerable to enemy flanking maneuvers.  Each team's starting area is fortified: only a coordinated enemy attack can break through and capture the final point.  This ensures that players who communicate will excel.

I strove to create an environment that felt lived in. I wanted players to see that the ruined buildings were once people's homes and places of business torn apart by a terrible war.  It was my first serious attempt at telling small stories using "micro-scenes." A micro-scene is a small collection of props placed in the environment to tell a small visual story.  In DoD_Husky, these range from a doll on the floor of a hastily abandoned apartment to a helmet that someone left on a doorstep and never came back for. While these micro-scenes are not central to gameplay, they contribute to the map's polish significantly.